?
Save
Ko Panyi: A Floating Village in Thailand
Share
Or
Copy

When we talk about cities or their lesser variations – villages, towns, communities –, we are used to evoking stereotyped scenarios that relate to streets, cars, buildings, and we often end up forgetting that there are plenty of other surprisingly unique patterns.

Many people study the cities and wonder about the exact moment when they were invented, given that they are open, unfinished works in progress. Some assume that their origin was due to the need for protection, which caused humans to quit nomadic lifestyles and settle as groups in a specific land to increase their chances of survival. 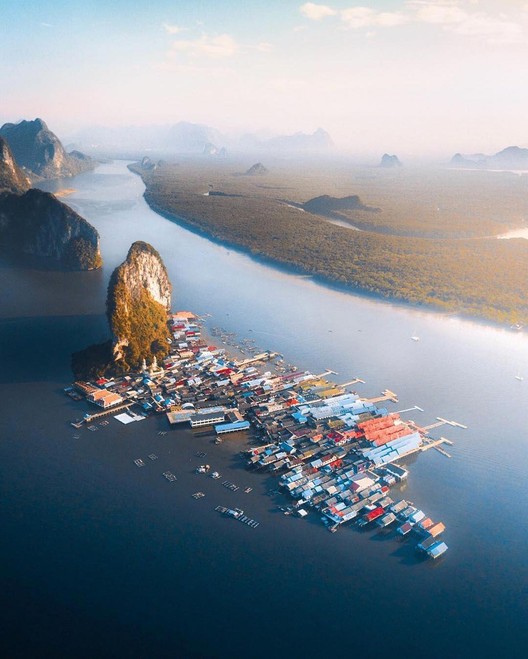 Such settlements can also be perceived as places with concentrated services – cultural, infrastructure, religious – that bring together different activities. In his book The History of the City (1980), Leonardo Benévolo stated that what defines a settlement is the overlapping of functions resulting from the various achievements of its inhabitants over time, which transform the urban environment, adapting it to their needs and interests.

In this sense, examining human agglomerations from a broader perspective, we come across various formats – Cartesian or tortuous, as Leno Souza (2016) states, which not even the multidisciplinary fields of knowledge can grasp, in a vain attempt at categorization and classification that tries to impose "urban personalities" such as peaceful, agitated, violent, tranquil, among others.

Ko Panyi definitely does not match the stereotype of an urban agglomeration. To categorize or classify it would be a complex task. It would be easier to describe it as one of Italo Calvino's invisible cities, considering that it is hidden on a bay in southern Thailand and protected by an enormous limestone rock formation about 200 meters high, with its constructions emerging from the water supported by long and slender stilts resembling flamingo legs, sheltering more than 360 families and a total of 1,680 people.

Its history began at the end of the 18th century following a law that limited land ownership solely to people of Thai national origins, which encouraged nomadic Malay fishermen to start a settlement built on stilts, taking advantage of the calm and rich bay waters. With the increase of wealth in the community, due to the growing tourism industry within Thailand, it became possible to purchase land on the island itself, where they later built a school, a health center, and a mosque.

In Ko Panyi, nature sets the rules, and man understands and responds to them. Although water does not have its own form, it is a corporeal element that carries the force of nature and is capable of generating design tensions. This tension is mainly due to the vulnerability of the structures while in dangerous ocean conditions during the rainy season, which also encourages emigration from the village.

Its structural base is raised on stilts, and the houses are built with wood and bamboo. One of the main challenges of living above water is dealing with the extremely limited hard surfaces, which reveals the lack of common areas and gathering places. Therefore, it is impossible to address Ko Panyi without mentioning the collective effort of the community in creating a space for leisure and games – also documented in this video.

Inspired by the 1986 World Cup, a group of children decided to build a floating pitch, which defied the geographical challenges of the location. The children started working after school to finish the playing surface with wood, nails, and fishing rafts. The 16-meter wide and 25-meter long pitch, located next to a pier, became a national treasure, even though it has already been replaced by a better one, due to the great impact of its story.

Following the example of the Malay people, there are many other settlements built over water. For example, at Lake Titicaca, Peru, where the pre-Incan Uru people live on 42 floating islands made of totora, a native thick, buoyant reed that grows abundantly in the shallows of the lake. Another example is the Amazonian village in Manaus, capital of the Brazilian state of Amazonas, where the foundations are built with timber from the Sandbox tree, which is very thick and water-resistant, serving as a floating device.

However, floating villages belong not only in the past and present but also in the future. In this article published in ArchDaily Brazil, we present the Oceanix City by Bjarke Ingels Group. According to the text, "as part of UN-Habitat’s New Urban Agenda, Bjarke Ingels Group has proposed a vision for the world’s first resilient and sustainable floating community, designed to accommodate 10,000 people. Oceanix City is a response to the prediction that by 2050, 90% of the world’s largest cities will be exposed to rising seas, resulting in mass displacement and the destruction of homes and infrastructure. The scheme is anchored in the UN Sustainable Development Goals, enacting circular flows of food, energy, water, and waste. Communal farming is at the heart of every platform, allowing residents to embrace sharing culture and zero waste systems. All communities, regardless of size, will prioritize locally sourced materials for building construction, including fast-growing bamboo that has six times the tensile strength of steel, a negative carbon footprint, and can be grown on the neighborhoods themselves."

Ko Panyi is far from representing a utopian future but still presents an alternative way of living in a community, respecting, and understanding nature as it is. It is an example that encourages us to realize how much we have to learn from different forms of settlements other than the stereotypical pattern that prevails today. Reviewing and recognizing different forms of settlement – with its pros and cons - is a very interesting exercise, especially at this time of uncertainty, full of social and environmental challenges.

See allShow less
Share
Or
Copy
About this author